A new study from McMaster University in Hamilton/Ont. suggests that we eat more fat, fruit and vegetables. The study followed 135,000 people in 18 countries for 7 ½ years. The prospective cohort study (Prospective Urban Rural Epidemiology [PURE]) from McMaster University has a lot of strength. The number of participants and the length of the observation period make it statistically very powerful. The researchers charted people’s meals and associated this with strokes, heart attacks and deaths that occurred in this population.  The Lancet published these findings.

Fat intake protects against strokes and lowers all cause mortality

The first study was regarding fat intake and the development of strokes, heart attacks and deaths in general. When researchers observed the effects of carb intake by comparing the highest carb quintile to the lowest carb quintile, the higher carbohydrate diet (low fat/high carb diet) had a 28% higher mortality rate. This does not fit into the old hypothesis that a fatty diet would be associated with a higher mortality and lower fat intake would be protective. Next the authors found that regardless of what fat people consumed, the mortality was 23% lower. They observed the effects of higher versus lower  consumption.

The effects of fruit or vegetables 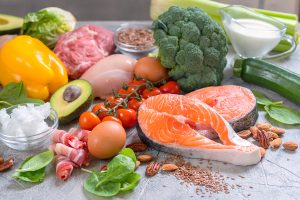 The recommendation of the authors is that a diet consisting of 50 to 55% of complex carbohydrates (fruit, vegetables and legumes), 20% of healthy fats and 25% to 30% of protein would reduce mortality to the lowest point. With regard to fat there is room to increase fats to 30% or 40%. It has to be emphasized that the key is to not increase the carbohydrate intake. There is no room for adding refined carbohydrates like rice, potatoes, bread or other starchy foods. These refined carb foods will increase the rates of heart attacks and strokes and increase the all-cause mortalities as well, including diabetes, cancer and other diseases. This study confirms what other smaller studies have stated in the last 20 years. It is safe to eat more saturated fat, and it confirms that the old teaching from the 1980’s –namely the low fat/high carb diet- was wrong.