Stereotactic surgery has been used for a selected group of Parkinson disease patients for several decades.  Lately there has been a rejuvenation for this procedure as more precise methods have been developed. I will first describe the conventional stereotactic surgery, then less invasive deep brain stimulation and the stereotactic ultrasound treatment.

Since the 1970’s when Sinemet came onto the scene stereotactic surgery was almost completely abandoned. However, when it was noticed that the effect of the medication can wear off, it is now being used again, particularly also in view of the fact that neurosurgical methods have become more precise and techniques more sophisticated with the use of CT and MRI scans.

Ref. 1 and 2 summarize this topic. In Ref. 2 the authors presented data on 13 patients treated with posteroventral pallidotomy. 77% of the patients had either an excellent or good result, the rest a fair result. Patients tolerated surgeries well and there were no deaths.

The authors felt that stereotactic procedures for Parkinson disease are a good alternative in cases where levodopa wears off or where side effects of the medications become intolerable. Often the improvement after stereotactic surgery holds up for up to 4 years. The authors of Ref.2 showed significant statistical improvements in the following: complete tremor relief, complete rigidity relief, complete relief of slow body motion and significant improvement in motor function of all muscle groups. 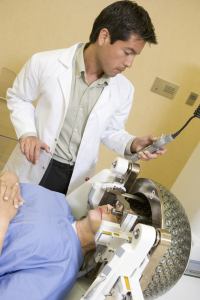 The FDA approved deep brain stimulation, or DBS for short, in 2006 for end stage Parkinson’s disease with significant movement disorder. Similar to a pacemaker for irregular heartbeats, this stimulator is a brain pacemaker where the electrodes are inserted into the globus pallidus. The surgery has an association of a certain risk (hemorrhage 1%, infection 4%). After that patients tolerate DBS well, which controls Parkinson’s disease significantly. The advantage of this procedure is that it does not destroy any brain tissue conventional stereotactic surgery does.

A new treatment coming from Israel is very promising as it does not involve any risky surgery, but works with precise, focused ultrasound beams. The patient who had a severe tremor prior to treatment will leave the treatment room immediately with no residual tremor! Here is a YouTube, which explains this in more detail.