In the majority of patients symptoms of Parkinson’s disease starts with a tremor (=involuntary movements) resembling”pill rolling” in one hand.

This tremor has a frequency of about 5 repetitions per seconds. It is most pronounced at rest, disappears during sleep and is diminished with movement. Stress magnifies the tremor. Hands, arms and legs are usually most affected, but forehead, eye-lids, jaw and tongue can also be affected. Here is a video demonstration of Parkinson’s disease gait (YouTube) before and after treatment with L-dopa.

Usually the voice is spared. In some people there is no tremor and the only symptoms in these patients can be muscle rigidity. As the disease progresses over the years it is the gait instability and muscle rigidity that gets more into the foreground. Also the face assumes a mask like appearance as the face muscles become stiff making it difficult for the patient to display the normal facial reactions to different emotional states. 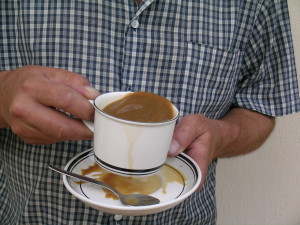 This facial expression might be mistaken for depression, which sometimes can also coexist. Gait problems result from the muscle rigidity with a tendency to fall backwards or forwards, also because of a weakening of the normal postural reflexes. The decreased muscle movements lead to problems with all daily activities of life including writing, holding on to a cup of coffee and personal care. In about half of the cases there is an associated dementia. As mentioned before, it is very common that the patient is often affected emotionally and depression has to be treated separately.