A lot of Alzheimer’s research has already taken place over the years.

Here are some of the results of such research. A research team from an Alzheimer’s Disease Research Center under Dr. Lopez (Ref.1) analyzed the results of the treatments and the research of Alzheimer’s patients over 2 decades. They found that there were at least 6 subgroups where Alzheimer’s was associated with some other significant conditions.

The majority was the patients with Alzheimer’s disease due to cerebrovascular disease. Next there were the groups with Alzheimer’s due to alcoholism (15%), depression (7%), thyroid disorders (4%), a history of head trauma (6%), and due to pernicious anemia ( 6%, due to vitamin B12 deficiency).

The researchers found that over 20 years the first three subgroups, namely the ones with cerebrovascular disease, with depression and with Alzheimer’s due to alcoholism had a decreased life expectancy, whereas the others had a normal life expectancy.

There are many research papers that have described that the senile plaques, which are found on the cortex of brains of Alzheimer patients, are made up of beta-amyloid substance and of neurofibrillary tangles.

To put it simple: This protein material is like glue, which prevents the neurons from working properly and causes the memory loss and the confusion so typical for Alzheimer’s patients. Over the years the question then arose where does this glue substance” beta-amyloid” come from? Ref. 2 points out that for many years it was thought that this abnormal protein would have come from the liver and was then deposited in the brain. There is now evidence presented in Ref. 2 that the beta-amyloid actually comes directly from the cells in the brain where it is found and also deposited. Ref. 3 showed that beta-amyloid is not useless at all. It actually has a very important antioxidant function in normal brains and keeps lipoproteins, an important chemical substrate of the brain, from getting oxidized. Recent research from the University of Pittsburgh School of Medicine linked these plaques with a loss of nitric oxide production in the brain, which would lead to a reduction of perfusion of brain blood vessels. This in turn can lead to a loss of oxygen and nutrients in the brain tissue (Ref. 21). 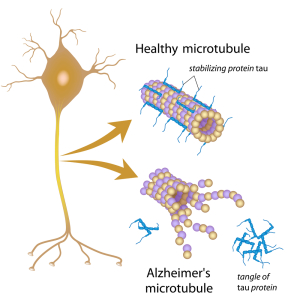 The Alzheimer’s patient’s brain appears to have a regulation problem where through some genetic or other mechanism, the auto-regulation of amyloid-peptides and other similar peptides appears to have gotten lost. There seems to be an overproduction of these peptides until they no longer are soluble. The insoluble surplus of these beta-amyloids is then deposited as the glue-like senile plaques that clog up the patient’s thinking and reactive oxygen species are also released in these plaques damaging nerve tissue. In Ref.4 the authors presented convincing evidence that low levels of a subtype of amyloid peptides was found to be lower in Alzheimer patients and in Lewy body dementia patients. The good news is that anti-oxidants will be able to protect our brains substantially as they will block the reactive oxygen species.

Ref. 5 showed, similar to the already mentioned Ref. 3, that this subtype of amyloid peptides prevents lipoproteins in the cerebrospinal fluids from being oxidized. Ref. 5 went further in describing the mechanism of how this is achieved. The authors suggest that this subgroup of amyloid peptides protects the very sensitive so-called “microtubules”, an important cell component of nerve cells in the CNS, from being destroyed. If this protective system is not functioning, nerve cells are lost and this affects thinking, memorizing and other cognitive functions of the brain.

With the newer test methods it is now possible to depict these senile plaques at a stage when clinical symptoms are not present yet, which is very useful for early diagnosis in high risk families.

At a conference in Vancouver/BC (Ref. 16) Dr. Howard Feldman who is involved in several clinical trials involving newer treatments for Alzheimer patients reviewed the beneficial effects of a combination of Memantine and Donepezil. The medications seem to prevent the amyloid aggregate formation and thus allow the brain to function more normally. Once the senile neuritic plaques (the “gluey substance”) have formed, an inflammatory reaction takes place that leads to neurodegeneration. This last stage is irreversible.

The key is to diagnose Alzheimer’s early with the above mentioned newer methods, to reduce or eliminate the inflammation and to prevent neurodegeneration from taking place. Cholesterol lowering drugs are a newer way to cut down on plaque formation, secretase inhibitors are another way. A-beta-vaccination has been successful in a mouse model to prevent Alzheimer’s, but in man 6% of subjects experienced encephalitis as a serious side-effect, so the vaccination approach has to be improved. Metal chelators are another new line of research to cut down on plaque formation as mercury, zinc and copper toxicity has been shown to play a role in this disease. There is also evidence that high insulin levels in the blood contribute to Alzheimer’s and this may be caused in turn from too much sugar intake.

For those of you who may be skeptical about the effects of mercury from tooth fillings, here is a You tube link to convince you otherwise. Mercury poisoning has been first detected in children with autism, but lately more and more evidence has accumulated regarding Parkinson’s disease and Alzheimer’s disease as neurological disorders that can be directly linked to mercury fillings (the more fillings, the more severe the disease).

The brain tissue has abundant amounts of hormone receptors, particularly receptors for testosterone, estrogen, progesterone, cortisol, growth hormone. The fact that women get Alzheimer’s first and men seem to get it at a later point in time, would indicate to me that the lack of natural hormones after menopause puts women at risk first for developing Alzheimer’s disease. Women tend to get menopause between the age of 40 and 55 (some even earlier). Men on the other hand enter into andropause at a later stage in their lives, about age 50 to 65. According to the 2011 Alzheimer’s Facts and Figures there were 5.2 million people over the age of 65 who had Alzheimer’s. Of these 3.4 million were women (65.4%) and 1.8 million were men (34.6%). At the age of 71 and older 16 % of women had Alzheimer’s disease, compared to with 11 % of men. Dr. Hertoghe has published under Ref. 19 that women need bio-identical estrogen, progesterone and a small amount of testosterone replacement for preserving normal brain function after menopause. Men on the other hand need bio-identical testosterone and a small amount of progesterone replacement after andropause. Both sexes also need smaller amounts of DHEA and pregnenolone as supplements as the adrenal glands are aging as well and cannot keep up normal hormone production on their own. Dr. Hertoghe pointed out in several lectures (Ref.20) that hormone replacement has increased in significance as people live much longer than in the past.

Books like “Breakthrough” (Ref.17) by Suzanne Somers have reviewed newer insights of antiaging medicine. This points out the importance of detoxifying the body from heavy metals like mercury, lead and cadmium.

Another breakthrough in terms of a nutritional supplement comes in the shape of a semi-essential nutrient, called phosphatylserine (PS), which prevents cognitive decline (Ref.18). This is a phospholipid, which is present in all cell membranes, particularly in brain cells. It has been extensively studied on Alzheimer patients and on patients at risk for cognitive decline including EEG and PET scanner studies. As outlined in Ref. 18 there have been many well-controlled studies regarding PS and improvement of cognitive and brain activity function, motor skills and various cognitive measures. Acetyl-cholinergic activity was boosted about 15-20 % when EEG studies were used. PET scanner activity was showing significant improvements in brain metabolism in subjects with relatively severe impairment. Only 300 mg of PS per day (in three divided doses of 100 mg each) were necessary for this. For prevention in normal subjects 100 mg daily are likely sufficient.

Resveratrol at only 200 mg per day showed significant memory improvement in a June 2014 study as this link explains.

All of the facts are not out yet about Alzheimer’s, but it is exciting to see the recent progress both in terms of early diagnosis and Alzheimer’s treatment. On the longterm prevention, as always in medicine, will prevail as the most effective method regarding diminishing the frequency of this disease.

Here are 10 steps that everybody can do today to minimize the risk of developing Alzheimer’s disease:

2. get a T3 and T4 blood test to rule out hypothyroidism (doctors often do not order T3)

3. Measure lead and mercury levels in urine and stool, particularly if you have more than 3 amalgamate tooth fillings

4. If you test positive for mercury, go for intravenous chelation therapy, which specifically remove heavy metals (including mercury) from your system.

5. Regular exercise and good nutrition have been linked to less Alzheimer’s disease. As Alzheimer’s patients are deficient in magnesium intake, it is wise to take a magnesium supplement as discussed in Ref. 22.

7. Take the nutrient phosphatylserine (PS) 100 mg once daily for prevention of Alzheimer’s and dementia.

8. Cut out sugar and starchy food by following a low-glycemic diet so that elevated insulin levels are brought back to normal.

9. Mayo Clinic research recently showed that computer based memory exercises in seniors will lead to significantly less Alzheimer’s disease in the years down the road.

10. Progesterone cream (only bio-identical, from compounding pharmacy) has anti-Alzheimer effects. Women would incorporate this into their bio-identical hormone replacement schedule following menopause. Men would utilize the brain rejuvenating effect of testosterone into their hormone replacement routine following andropause. Both also take small amounts of oral DHEA and pregnenolone, but have blood or saliva tests from time to time to measure hormone levels.