A pneumothorax means literally “air in the chest”.

The only problem is that the air this time is not in the lungs, but in the pleural space, which is located between the surface of the lung and the chest cavity. There is normally no air there, but just a bit of slippery fluid.

The recoil of the lung tissue from the elastic tissue in the lung collapses part or all of the lung and air gets sucked in creating the pneumothorax . This illustration shows schematically what happened without the gory details you would see as a physician in the Emergency Room of a hospital where this patient should be.

In emphysematous patients there often is an emphysematous bleb (an air filled thin blister that can easily break), usually located in the upper lung regions. Tall men, often younger than 40 years of age, can get a so-called “spontaneous” pneumothorax with no apparent cause. A more sinister cause can be a tumor in the bronchial tube (lung cancer) where the tumor creates a connection between the air from the bronchial tree and the pleural space resulting in a pneumothorax as well. Occasionally a procedure such as a central intravenous line can cause a pneumothorax as well, which is why physicians usually do a chest X-ray when the procedure is completed to check this out.

The patient is suddenly short of breath and likely also complains of chest pain due to the irritation of the very sensitive pleural surfaces by air that is normally not found there. A minor pneumothorax may be missed and may be only detected on chest X-rays that perhaps were done because of an associated cough from a cold, where the doctor wanted to rule out pneumonia. With a larger pneumothorax there could be a dry, hacking cough and heart palpitations may be felt. In a large pneumothorax where most of the lung is collapsed, the circulatory symptoms may be in the foreground with a sudden collapse and serious breathing problems. There is a particularly serious pneumothorax, where a valve mechanism develops. With every breath the patient takes, more air gets pumped into the pneumothorax leading to a tension pneumothorax. This link describes the symptoms of this. 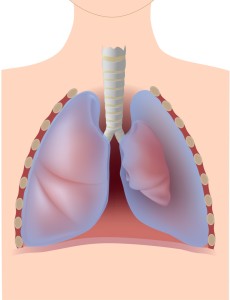 The treatment for a pneumothorax is usually a chest tube for a view days in the hospital setting until the hole in the lung seals itself as shown on this link. The chest tube is hooked up to a vacuum, which facilitates re-expansion of the lung. Within a short period of time (1 to 3 days) the cardiovascular status tends to stabilize and the patient can often be discharged home within less than a week from the date of the hospital admission. In the case of lung cancer the patient has to be worked up and treated by a cancer specialist. In the case of an emphysematous bleb at the top of the lung, resection of this through thoracoscopy, which essentially is a “chop-stick” surgical set-up can be used instead of the traditional open procedure in order to resect the diseased top lung portion. In the case of a minor to mid-size lung surgery procedure this can be done with a stapling device through thoracoscopy chest wall openings. The patient recovers from this surgical laparoscopic procedure much faster than in the past from a conventional thoracotomy procedure where the chest cage was cut open.

6. Merck Manual : pneumothorax (thanks to www.merckmanuals.com for this link).