Leprosy is an ancient disease, which only has lost in significance recently due to better medications that are available. Originally it was known as Hansen’s Disease; in Europe it is known more under the name “Lepra”.

Despite some success with medication this skin deforming disease is still a serious health threat in many development countries because of poverty and the inability of the masses to afford effective anti-leprosy medication. The cause for leprosy is the Mycobacterium leprae, an acid-fast bacillus similar to the one that causes tuberculosis.

There are more than 10 million people in the world that suffer from leprosy, which is affecting mainly skin nerves, skin and mucous membranes (=the moist skin inside the mouth, nose, the anogenital area, the tip of the penis and the vagina). There is still no consensus how exactly leprosy is transmitted, but we do know that it can be transmitted through nasal secretions that contain leprosy bacteria. But there are also some animals like armadillos in Louisiana and non human primates that can harbor leprosy bacteria. Household members of a leprosy patient are a a higher risk to also come down with leprosy.

Here is a link to a leprosy picture.

There are two extremes of leprosy depending on the state of the immune system as I will point out in more detail below. The one form is tuberculoid leprosy and the other form is lepromatous leprosy.

In a patient with a healthy immune system who is highly sensitized, leprosy manifests itself as tuberculoid leprosy. The patient will have a few depigmented spots of skin that have altered or missing sensitivity. There is no sense of heat, cold or touch. The cellular reaction, which penetrates the skin destroys the sweat glands, hair follicles and nerve endings. Nerves adjacent to affected skin spots can get damaged and enlarged. There is no itch associated with this type of rash and the presentation is asymmetrical. There is hardly any or no Mycobacterium leprae present in the affected skin or nerve tissue.

Spread of infection through lymphatic connections and nerve pathways

However, untreated the infectious process eats its way backwards through lymphatic connections and along the nerve pathways more into the center of the extremities. Eventually it affects the circulation in the periphery leading to loss of muscle power, loss of pain perception (because of damage to the nerves) and huge, ugly ulcers where the diagnosis was too late to rescue the tissue. Loss of toes and fingers are the result as well as hopeless super-infected deep forearm and lower leg ulcers. Often only amputation can rescue the patient, who otherwise would die from septicemia of other bacteria or fungi. 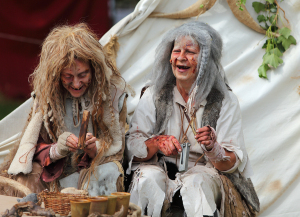 If the immune system is weak, the Mycobacterium leprae is present abundantly in plaques and nodules of disfigured skin, which present symmetrically. TV stations show these images and we are familiar with it. As the whole skin thickness is affected, much disfigurement is associated with this form, which can lead to the loss of the nasal septum and palate. Soft nodules appear on ears, the nose and cheeks . They can break down and give way to discharging sores. Progress of leprosy is slow: it takes years to develop from a sore to a full blown case of leprosy.

In Latin America and Mexico patients often have a diffuse infiltration of the skin, which leads to hair loss and loss of skin appendices (nails, ears,part of nose; affecting also testicles and scrotum). This condition has the name diffuse lepromatosis (or “lepra bonita”).

There is another form of leprosy in the middle of the two extremes of leprosy, borderline leprosy. However, this type is not stable and wants to shift into the direction of tuberculoid leprosy or lepromatous leprosy.

The way the immune system reacts is also deciding how the physician has to treat the disease. Before the physician treats, the type of leprosy (in Latin “lepra”) reaction has to be determined, see table for details on this.

There are two types of lepra reactions

Borderline leprosy patients may develop a flare-up of inflammation in existing leprosy skin lesions or newly infected skin and/or nerves (neuritis). There is an association with a fever and pain of the affected region. This reaction commonly happens during therapy. Physicians call this  a “reversal reaction”. It is due to T helper cells that produce large quantities of cytokines such as interferon-gamma. The health care giver prescribes corticosteroids for several months to mitigate this reaction.

Approximately 50% of patients with lepromatous leprosy will develop a painful condition called erythema nodosum leprosum (ENL) in the first years of successful leprosy therapy. ENL is due to circulating immune complexes and vasculitis involving inflammatory cells, T helper cells and circulating tumor necrosis factor. This inflammatory process eventually leads to skin ulceration and also to inflammation of lymph glands (lymphadenitis), arthritis, glomerulonephritis (an inflammatory kidney disease) and orchitis (=inflammation of testicles). Other target tissues are the bone marrow and the liver, which leads to hemolytic anemia and abnormal liver function tests. The physician treats milder cases with aspirin, more severe cases with a brief course of corticosteroid medication. With recurrent lepra type 2 reactions the treatment of choice is thalidomide. The only exception is that the physician cannot give thalidomide to pregnant women or to a woman who contemplates pregnancy because of fetal malformations from the drug.

A limitation of the testing methods is that the Mycobacterium leprae will not grow in standard Petri dishes in the lab. The bacterium requires living skin or nerve cells to multiply. However, it can be grown in a mouse footpad in cases where the clinical diagnosis is not certain.

In this case the health care provider injects body fluids suspicious of leprosy into the footpad of an experimental mouse with a fine needle. After a certain incubation period the pathologist sacrifices the animal and obtains a histological diagnosis of the injection site. In a positive case there are characteristic histological signs and the acid-fast bacillus is present. This testing model also serves for drug sensitivity testing. The same antibiotic that the pathologist uses to treat the mouse the physician can prescribe to his leprosy patient later.

The diagnosis of leprosy hinges on clinical examination. The physician identifies the typical skin lesions and the patches of loss of skin sensitivity due to peripheral neuropathy. The physician then takes a skin biopsy from the active edge of a tuberculoid lesion. In patients with lepromatous leprosy the health care provider takes a biopsy of one of the nodules or plaques. There are very characteristic foam cells and also the acid fast bacilli that the histopathologist identifies. The histological finings occur only in leprosy. This histological “blueprint” together with the other clinical features forms the basis of how to identify the presence or absence of leprosy.

In the past only dapsone (a sulfur containing antibiotic) was available to treat leprosy patients. However, leprosy is often resistant to dapsone. Multidrug antibiotic therapy is the method of choice for all forms of leprosy. The authorities recommend to test drug sensitivity in mice for all newly diagnosed patients. In this way one knows whether or not the Mycobacterium leprae is resistant or not to the drugs.  At the same time testing in mice allows the physician to establish an effective combination of drugs for the leprosy patient. The WHO recommends long term treatment and the length of treatment depends on the bacillus load based on tests with skin biopsies.

When lots of bacilli are present in biopsies, physicians give a combination of dapsone, clofacimine and rifampin for between 2 and 5 years. Treatment stops only when multiple skin biopsies are negative.

Leprosy with paucity of bacilli

The doctor orders dapsone and rifampin for 6 months to 12 months for cases with a paucity of bacilli on biopsies (tuberculoid leprosy).

In the US, where dapsone resistant strains are rare, Physicians treat lepromatous leprosy with dapsone for life, but they add rifampin during the first 2-3 years. With tuberculoid leprosy physicians prescribe dapsone as a single drug for 5 years. Details can be obtained from the Gillis W.Long Hansen’s Disease Center, Rockville, MD, Tel.1-800-642-2477.