In children who have an RSV infection of the airways often come down with a condition called bronchiolitis.

This is an inflammatory condition of the small bronchial tubes, called bronchioles, (thanks to therapeuticdelight.com for this image) and this condition is indistinguishable from asthma. In fact children with a history of recurrent bronchiolitis episodes with viral infections often develop asthma later in life. The only difference is that in the case of bronchiolitis the spasmodic condition in the small bronchial tubes disappears, whereas in asthma it remains.

In an asthmatic there is a hyper-reactivity of the small airways and this can be measured with a spirometry (thanks to umm.edu for this image) device. With this machine that patient breathes into a tube while the nose is plugged and the airflow per second is measured by a recording. An asthmatic will move less air in a certain time unit, but after an inhaler with a bronchodilator is given, the forced expiratory volume per 1 second (FEV1) improves (from obstructive colored line to normal black line). The following is a brief overview of the classification of the severity of asthma (modified from Ref. 8, p. 561). 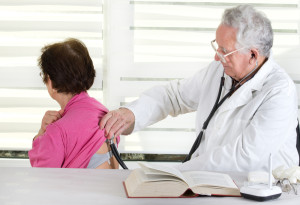 Bronchiolitis is treated symptomatically. If it were a viral illness that precipitated the bronchitis, oxygen by mask and intermittent inhalation with bronchodilator medication (beta-agonist therapy such as salbutamol) would be given to open the airways. In more severe cases corticosteroids might have to be used for a brief period of time to suppress the inflammatory response. Secretions have to be monitored for pus and bacterial overgrowth and this would have to be treated with antibiotic therapy.