Children’s health issues often gets neglected as they may not be able to verbalize to their parents, if they have pain or when there is a problem. But children often do get diseases that are typical for childhood such as skin rashes of childhood diseases, chromosomal abnormalities or infantile epileptic seizures.

In the beginning of life there can be feeding problems that need to be overcome so that normal growth occurs. Children need to take enough fluid in at all times; otherwise they dehydrate faster than adults do. Adults’ bodies are so much bigger that they can survive some time without fluid intake before they dehydrate, children don’t have many reserves. 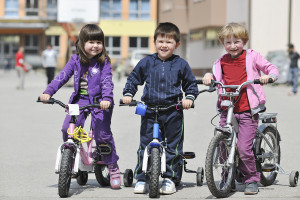 Here are some typical childhood conditions that are worth noting.

Children’s bones are soft and more pliable than adults’ bones, so children may not get a fracture after a fall or only get greenstick fractures while an adult with the same fall would get a complicated fracture. With a greenstick fracture the softer bone only bends, but does not break through completely. These types of fractures often heal within only two or three weeks with splinting, while in an adult a fracture would have taken 4 to 5 weeks to heal in a cast.

For instance, a few decades ago there has been a dramatic breakthrough with respect to survival in children with child acute lymphoblastic leukemia (ALL) due to aggressive early intervention and maintenance treatments.

Seizures can occur in childhood, such as absence seizures, atonic seizures in children and febrile seizures. The latter ones occur in children between 3 months and 5 years as the seizure threshold during that time is much lower than in older children or adults. Infantile spasms occur during the first 3 years of life, mostly because of the described seizure readiness of the brain in a younger age, but possibly also because of an inherited tendency for seizure activities later in life.

Myoclonic seizures occur in children as well and may be due to a recessive inheritance pattern.

In a blog I have mentioned a study where they showed that symptoms in children are expressed quite differently than in adults. For instance instead of depression children express irritability, instead of insomnia they may suffer from sleepiness. In terms of manic symptoms children may display chattiness instead of pressured speech in adults, they may steal or engage in sexual behavior instead of risking money in the stock market or drinking excessively. The healthcare team may miss suicidal behavior in children. They may hide some of their depression and feelings of hopelessness in temper tantrums.

Children’s lungs are much smaller than adults’ lungs. This may perhaps be the reason why asthma can deteriorate faster in children than in adults. Complications like pneumonia need to be carefully watched for. It is often in childhood that environmental allergies are first detected and in many children asthma can be stabilized by putting them on allergy shots for a period of several years until the asthma stabilizes. If asthma is not attended to meticulously, a status asthmaticus can develop, which is an acute, life threatening flare-up of asthma. Every year a number of children and adolescents are still dying from status asthmaticus.

A special case of breathing problem is “lymphocytic interstitial pneumonitis”(LIP), which occurs in children and infants who have been exposed to AIDS. 50% of infants presenting with LIP have AIDS. We may not see this as much in North America, but it is very common in Africa and other development countries around the globe where AIDS is also rampant. AIDS without treatment causes “honeycomb” lung and premature death from a lack of oxygen. Proper treatment consists of AIDS antiviral cocktails and antibiotics to combat bacterial superinfections.

If a vaccination program has not been followed, there will be the typical childhood rashes and infections as the immune system meets the various viruses and bacteria around the globe. Measles, rubella, chickenpox, scarlet fever, fifth disease and erythema subitum are very common (see “Childhood Rashes” link). But bacterial meningitis is still a threat despite the availability for many years of the pneumococcal and haemophilus vaccines. As vaccination compliance goes down, meningitis cases go up! The same is true for polio and measles, which have recently rebounded as vaccinations against these life threatening diseases have gone down.

Child abuse is a reality, as every physician working in an emergency department of a hospital knows. This is a complex problem that often involves poverty, a lack of education, untreated mental disease and drug and alcohol abuse on the part of the adults. In any case of child abuse all of these issues need an assessment by a caseworker. First, injuries from childabure need treatment. But, secondly,  a social worker and possibly a counselor have to see the child and follow it closely. Thi will hopefully prevent future child abuse.

Autism is a complex neurodevelopment disorder with abnormalities in the neurological and/or psychological development resulting in difficulties communicating and interacting socially. Repetitive and stereotyped behavior patterns can be present as well. A DAN physician (DAN= defeat autism now!) and a multidisciplinary treatment team can address all of the facets of autism adequately. An active treatment schedule can last 2 to 3 years or longer. A high percentage of young autistic children will be able to enter a normal life. This includes regular work situations and finding and maintaining lasting relationships. Some of them will be overachievers. They have to fight their way up in society when they were very young and still sick. The end result are strong personalities that are successful in what they do.

In the premature baby there is a danger when too much oxygen is used during the incubator phase that “retinopathy of prematurity” develops; read more info about it under this link. Importantly, the eye specialist should see the child early on and do laser surgery sooner rather than later to improve this condition.

Children often develop visual acuity problems like shortsightedness or astigmatism later in life, typically between 10 and 12, if there is shortsightedness in the family, but some children need glasses already when they are 5 or 6. The sooner this is remedied the better for the child.

A child might not be aware that there is a hearing problem on one ear.  The other ear is functioning, but this affects the directional and overall hearing. Good hearing is important in the classroom setting. The child should be checked when there is a problem on one or both ears. Sometimes there is wax in the ear and the physician needs remove it.

There may be an undiagnosed eardrum perforation from a jump into the pool. In another case a rare cholesteatoma maybe present that needs urgent attention by an ear/nose/throat surgeon for removal. All of this can cause deafness.

Undetected allergies can gum up the middle ear with secretions that interfere with sound transmission. Ear tubes for a period of time may be the answer for this.

When a child stays severely behind in growth, it is called “dwarfism”. This can be a genetic condition and may be a rare case only affecting growth. In another case it may be associated with a number of other abnormalities, which points to the possibility of a chromosomal abnormality. The pediatrician will have to do extensive testing to diagnose the underlying condition. Growth hormone may be used to mimic normal growth until the growth plates close when puberty sets in.

The chromosomes can be different from the normal 46 XY constellation.  With a lack of normal sex hormones a condition with the name of primary hypogonadism may be present. Klinefelter syndrome (47 XXY) and Turner syndrome (45, XO) are two examples of such relatively common conditions. The links indicated will give you more information.