Retinitis pigmentosa is a hereditary eye disease where the retinal rods are affected.

Usually it becomes manifest by defective night vision first in childhood or later in early adulthood. The hereditary factor is variably penetrant as it can be autosomal dominant (child has symptoms) or autosomal recessive (symptoms start later in life).

The initial symptoms are defective night vision, often detected in early childhood. Later a change in vision with a characteristic visual field defect (a so-called”ring scotoma”) becomes evident that can be tested by visual field testing. This becomes eventually so pronounced that there is a loss of peripheral vision to this tunnel vision as shown here.

Examination by the eye specialist shows the pigmented appearance of the eye background as indicated in this link.

Treatment at this time is very restricted. Nevertheless, here is a site that shows attempts of a company to develop a high-tech solution with an implanted microchip  that has already been tested in preliminary trials. However, further testing needs to be done and longterm outcomes and FDA approval have to be awaited. 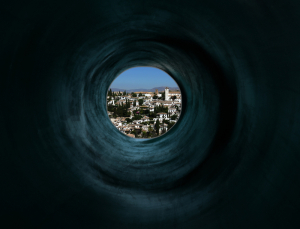