First of all, rheumatoid arthritis (RA) is the most common connective tissue disorder. In the past it was responsible for most of the chronic crippling images, but even now with all of the newer treatments it remains an important cause of disability and cause of premature death. In addition, in severe cases life expectancy is reduced by 4 years for men and by 10 years for women (Ref. 1). In like manner, the rate of occurrence of RA in Western countries is about 2% of the population. Moreover, at a younger age women are affected more often than men with a frequency of 3:1. By the same token, in elderly people the ratio between male and female is equal. 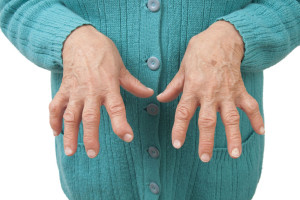 In the same fashion, there seems to be a genetic predisposition: namely, people with the surface membrane antigen type HLA-DR4 in Caucasians are significantly more prone to develop this disease. Because of this there is a modification of the immune system, which starts producing antibodies directed against synovial membranes of small joints. The comparatively most severe cases involve small joints and large, weight bearing joints with destruction in a crippling manner (Ref. 2).

With newer research it is now apparent that there is “double trouble” in rheumatoid arthritis patients, namely a chronic inflammation in the body from a lack of omega-3 fatty acids in the diet (or poor utilization) and an intolerance of the immune system to broken off cartilage pieces in the affected joints. As a result this has led to an alternative medicine approach where chicken cartilage collagen is given along with high potency omega-3 fatty acid supplements (see under “Treatment Of Rheumatoid Arthritis“).

Rheumatoid arthritis is a common polyarthritis that can affect any joint. Notably, it is an autoimmune disease, where the synovial membranes of joints experience chronic inflammation. Eventually the ligaments and the cartilage experience destruction resulting in joint stiffness, severe disability and premature death. Present research is concentrating on more specific drugs, which would inhibit the autoimmune response without inhibiting normal immune functions. Also, researchers need to solve the puzzle of this disease through genetic approaches.