Arthritis has several synonyms that all mean the same, but can be confusing: joint inflammation, rheumatism (often in Europe, e.g. “Rheumatismus” or in short “Rheuma” in German).

Almost every person gets aches and pains in the joints or muscles at one point. We all know what sore muscles feel like from overuse. We also know what a sore back feels like when we lifted something too heavy.

But some people seem to be more prone to getting sore muscles or sore joints than others. In the past there was the belief  that as we age, we all will eventually get one of these diseases. However, newer research has shown that there are a number of factors that lead to a higher risk for developing arthritis and rheumatism. This is much like there are risk factors for diabetes or for heart disease. In the following I will briefly describe these known risk factors.

It is only in recent years that physicians are realizing that certain risk factors  lead to arthritis and rheumatism. They are often the same risk factors that lead to heart disease or cancer. It seems that a dysbalance of certain metabolites called “eicosanoids” can create a disbalance and cause these diseases. These tissue hormones derive from essential fatty acids (from food).  This includes such substances as prostaglandins, thromboxane, leukotrienes, hydroxylated fatty acids and others. Ref. 1 reviews these hormones in detail and Dr. Sears distinguishes “good” from “bad” eicosanoids. With regard to arthritis too many “bad” eicosanoids lead to inflammation of joints (Ref.1, p.167).

Zone diet can counteract the risk of getting arthritis

In the various chapters regarding the different forms of arthritis I am discussing some of the known mechanisms of inflammation. “Bad” eicosanoids associate with the syndrome of insulin resistance (high levels of insulin in the blood). People can eat a special diet to stabilize and even cure arthritis and rheumatism. Such a diet contains no refined sugar and no starches. It contains appropriate amounts of protein and complex carbohydrates as well as a small amount of fat. It is the “zone diet” and I can only recommend this to anyone suffering from such a disease (Ref. 2).

There has been a link noticed between hardening of the arteries (=arteriosclerosis) and degenerative disc disease as well as between hardening of the arteries and degenerative joint disease (Ref. 3). With arteriosclerosis of the nutritional vessels not enough nutrients and oxygen reach the discs of the intervertebral bodies. In addition the lining of the joints also suffer nutritional depletion and degenerative changes occur. Inflammation sets in secondarily with the release of prostaglandin E2 and other inflammatory mediators, which leads to pain and loss of motion (Ref. 4).

Anything that ages a person faster such as heavy smoking will also lead to accelerated degenerative changes in joints and discs. Arthritis and back pain are therefore common among this subgroup of people.

There can be genetic reasons for some people who get arthritis or rheumatism. For instance, we know that psoriasis patients can get a psoriatic arthritis and psoriasis is a genetically linked skin disease. Ankylosing spondylitis, Reiter’s disease and some forms of rheumatoid arthritis and lupus can all be found more often in certain families. However, it is not clear how the genetic transmission occurs in these cases. 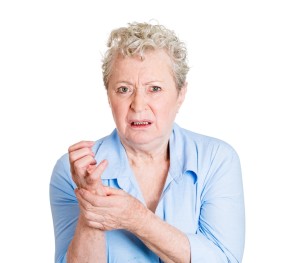 In the last 10 to 15 years many studies have shown that the various forms of arthritis have an underlying chronic inflammation, which maintains inflamed, swollen joints and causes stiffness and pain. The consequence of this is that you can eat to reduce inflammation as this link shows. It is the omega-6 acids of processed and fast foods that are detrimental to the body’s omega-6 to omega-3 fatty acid ratio. It follows that with an increased intake of fish oil (in the form of molecularly distilled omega-3 fatty acids) the inflammatory process gets toned down and may even stop arthritis.

If you have arthritis, be cognizant that chronic inflammation is perhaps largely present in your joints now, but it likely can travel into your blood vessels and coronary arteries (danger of heart attacks), into the brain vessels (danger of stroke), and even into the brain where it may cause Alzheimer’s disease or Parkinson’s disease down the road. A Mediterranean type diet and exercise will counter the inflammation. Detoxification such as chelation therapy and antioxidant supplements will also help. Molecularly distilled omega-3 fatty acids in higher doses (6 to 7 capsules per day) will bring the inflammation under control.