There are several organs in the right lower abdomen. They are the appendix, the small and large bowel. Additionally the right kidney sends the ureter to the bladder underneath the back wall of the abdomen. With women the right ovary and right tube are there. In males there is a weakness of the right lower abdominal wall. This weakness is where the testicle descended making males particularly prone to inguinal hernia.

So, with this in mind right lower abdominal pain consists of a number of possibilities. We need to include them in the differential diagnosis. Assume that a physician examines a patient in the office or the emergency department of a hospital. He/she needs to follow all these thought processes as you can read here.

The large intestine can cause pain from  constipation, from diverticulitis, ulcerative colitis or a developing colon cancer. The small bowel can cause irritable bowel syndrome , Crohn’s disease or gastroenteritis.

In women ovarian cancer,  an ovarian cyst or PID (pelvic inflammatory disease) from a Chlamydia or gonorrhea infection could cause right lower abdominal pain.  A tubal pregnancy of the right tube could also be behind such pain and a pregnancy test should be done to rule that out.

Males can develop testicular torsion,  a painful condition that in the testicular area with radiating pain into the lower left or right abdomen depending on which side it is on. A right inguinal hernia can develop following a heavy lifting incidence that can rupture the weak abdominal wall internally and allow a small bowel loop to force its way down the right inguinal canal. A surgeon has only a limited time, namely 4 to 6 hours to rescue the bowel of this patient. The surgeon will move the small bowel loop back into the abdominal cavity. Subsequently he will close the hole in the abdominal wall during the same hernia repair procedure to prevent future problems. The times of wearing hernia trusses in the past are over. The earlier you attend to a hernia problem, the better as with age the surgical risk is increasing.

An ileus can happen with an inguinal hernia where the gut stops working. Sometimes an ileus develops when there had been previous abdominal surgery and a bowel loop (small bowel or large intestine) gets caught in adhesions (=scar tissue) from prior surgery leading to bowel obstruction. This is an acute emergency requiring hospitalization. 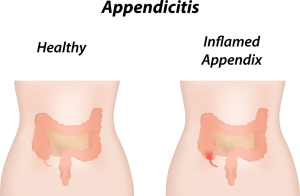 A kidney stone passing from the right kidney into the bladder may cause labor-like pains while being transported there through rhythmic, spasmodic contractions of the ureter producing  pain in the right abdomen. Crohn’s disease is another bowel disease of both the small and the large intestine that can cause pain wherever it is active including the right lower abdomen.

One of the ever present dangers in the right lower abdomen is appendicitis. Attached to the cecum, the first part of the colon is the appendix. It has different lengths and different locations from one person to the next. Because of this the symptoms can vary greatly and an appendicitis is easy to miss. Should a physician overlook this condition, the appendix perforates and contents of bowel with lots of bacteria get into the abdominal cavity. This causes peritonitis, a life threatening condition! The message is to never take right lower abdominal pain lightly. Go for a check-up by an experienced physician, best by a general surgeon. An appendectomy takes less than one hour to do, but overlooking appendicitis could cost you your life due to peritonitis and sepsis. Another example where prevention is better than trying to cure later.

Pain in the right lower abdomen can also be caused by a volvulus. This strange word means that a gut loop (small intestine or colon) twists itself around itself thus jeopardizing the blood supply to the twisted bowel loop. It happens in the very young (often some minor malformation with a more free floating intestine) or in the very old (typically the cecum area) and it is an emergency requiring urgent surgery. I remember assisting surgeons in both cases. It is amazing to see the tissue recover by untwisting the loop early during the surgery restoring circulation. However, I also remember a case where the older person did not feel enough pain initially when the cecal volvulus developed. The surgeon needed to remove the dying bowel loop with the two bowel ends sown together (medically called “end-to-end anastomosis”).

This wraps up our quick review of the right lower abdomen.